If you’re like me, BioWare’s announcement that Mass Effect 3 was being pushed back to March 6 made you want to scream.  But likely in an attempt to belay our rage, BioWare also announced its N7 Collector’s Edition, available upon preorder.

BioWare is no stranger to including bonus content in their newly released games.  New copies of Mass Effect 2, Dragon Age Origins & Dragon Age 2 all included free downloadable content as well as promotional items from some of the retailers.  Although this is a good deal for consumers, because it saves you money, it also makes good business sense.  By offering some extra content for free, it encourages consumers to purchase the games early, instead of waiting to buy used or reduced priced copies.

The N7 Collector’s Edition will top all of these offers.  Not only does it include bonus in-game items, but more tangible bonuses as well.

The collection is priced at $79.99.  Given the amount of content included, & the fact that the regular game is $59.99, twenty dollars extra is good price.  They say there’s a limited number available, but I suspect it’s more a matter of limited time rather than amount.  Regardless, I’ve already ordered my copy, but I still have to wait until next year.  Curse you, BioWare, for getting us all worked up!

What better way to celebrating our country’s independence than by staying inside, avoiding your family, & bunkering down with some quality games?  Really, I’m not that unsociable.  I do plan on having a barbecue with my parents later today.  But when you work in emergency services like I do, you tend to avoid crowds on your off days, especially on holidays.  (At least at work I get paid to deal with drunk idiots.)  And I have taken breaks from my games to play with my new kittens outside.  But after the heat, rain, & bug bites, I eventually seek refuge in the climate-controlled, pest-free comfort of my room.

But what to play?  Seeing as how I’ve completed most of the games in my library at least once, I decided to some ‘trolling on XBL & see what indie games were out.  I was looking for something different, something I hadn’t heard about yet, like Limbo or Death Spank (not that there’s anything wrong with them, I was just feeling adventurous).  So after browsing the highest rated I downloaded a few trials for games that looked interesting.  What was the outcome & what games were worth paying for the full version?

This is sort of the gaming version of those R.L. Stine Goosebumps Choose-You-Adventure books.  The entire gameplay is text-based.  The game consists of sloppy text over a blurry red & black background.  Once you’ve read the text, you’ll have several options for your next action.  Sometimes it’s simply moving to the next room, others are interactions with things in the room.  Honestly, I only played through the trial & wasn’t interested enough to buy the full game.  But in that time I’d run into a bleeding first aid box, a headless woman in the closet with a cell phone who either ignored me, sliced me to death with a katana or beat me for trying to touch her.  I get the feeling that, despite the dark visuals & soundtrack, the game is trying to be more funny than scary.  It wasn’t even able to scare me, which is pretty bad. 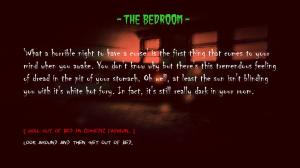 A sample of your background

Beat Hazard is a shooter that reminds me a lot of the old Asteroid game, but with much better graphics.  The main selling point of the game is that the action is driven by your music.  The game scans your music library (& comes with six tracks in case you don’t have any) & the louder, more intense the music, the more powerful you become.  The graphics also respond to the music, becoming more vibrant with the beat.  Each level is a specific song.  I tried the game with a variety of music, & it seems to work best with rock, heavy metal, etc.  Anything that’s fast & with a heavy base.  Lucky for me, I have a lot of Disturbed & Breaking Benjamin songs.  The controls are pretty simple: use the left stick to move & the right stick to shoot.  I haven’t bought the full version yet, but I most likely will. 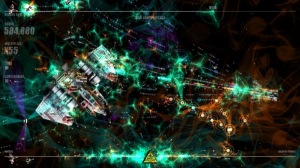 Is it any wonder the start screen has a seizure warning?

For the life of me I can’t figure out why I insist on torturing myself by playing horror games.  But after the trial of Decay I just had to buy the full game.  Decay comes in four chapters, each of which has to be bought separately (80 for the first & 240 for the other three).  It’s a point-&-click adventure/horror games.  Remember those?  It’s like Myst but with a scary atmosphere.  This game is amazing, simple enough.  The story starts out with you waking up after apparently hanging yourself.  Over the next four chapters you learn about your family & the serial killer who won’t let them go even in death.  Like all adventure games, the gameplay involves exploring the area & looking for items you need to solve the next puzzle.  It’s not heavy on puzzles, but there are some interesting ones, like playing tic-tac-toe with the dead.  The visuals are amazing.  Everything’s dark & desolate, with a grainy quality.  That, combined with excellent sound (both effects & music) lend perfectly to the tense atmosphere.  You just get more & more tense as the game goes on, always expecting something.  For the most part the scares are subtle, like shadows behind a door or footprints on the ground.  But that doesn’t mean there aren’t some genuine “Oh My God” moments.  Two in particular stick out for me.  I won’t say which chapters they’re in but one was while playing a seemingly benign game of breakout the freaky doll (that’s right) that’d been following me around suddenly appeared in the monitor reflection, or when backtracking to leave a room a shadow figure pops up in front of me.  Both scenes literally made my heart stop.  I haven’t finished the final chapter, but expect a full review when I’m done.

Even after learning the reason behind the doll, which is actually touching, it still freaks me out.

“What’s this?  Surely that’s a typo, GamerDame.  Everyone knows Lovecraft’s most well-known monster-god tries to destroy the world.”  Well, yes.  But now his powers have been sealed away & the only way to reclaim them is by becoming a hero.  Cthulhu Saves the World is an 8-bit styled RPG along the lines of the original Dragon Quest game & other classics RPG’s, but it has an amazing sense of humor.  The characters are funny, the dialogue is funny.  There are even references to Lovecraft’s other works.  Gameplay is pretty standard for these types of games.  You wander around wilderness & towns, having random encounters resulting in turn-based menu combat & find treasure.  But there are unique features aside from the story.  Random encounters in one area are limited, but you can select the “Fight” option in your menu for more.  Enemies can be turned insane.  And you can save anywhere you want.  I only played to the first battle when I decided I had to have the full game.  It’ll probably be a bit, but I will eventually review this game once I’m finished. 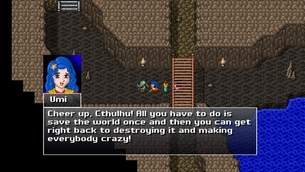 Save the world to destroy it?

Sequence bills itself as a rhythm/RPG hybrid, but I’ve found little in the way of pure RPG elements.  You can gain items during combat that you can use to craft different items to improve your stats, & choose which spells you want to learn & equip, but that’s extent of the role-playing aspect.  That being said, it’s still a good game.  You play as Ky, a man who finds himself in a strange tower being guided through battles by a woman on an intercom named Naia.  The voice-acting is pretty good & the cutscenes are all still pictures, but the drawing is well-done.  Combat is where the rhythm part comes in.  Without getting too complex, you cast spells, defend & replenish mana by keeping the beat & pressing the corresponding arrows.  I haven’t played lot a rhythm games, but I picked it up easily enough.  The music is good.  Most of the tracks are really catchy, so picking up the beat is easy.  The strategy is that these abilities are in different fields, & you can only use one field at a time.  For example, if you want to cast a spell, you leave yourself open to attacks because you can’t defend.  Eventually you gain the materials to make a key that leads to the floor’s boss.  After beating him, you advance to the next floor.  I’m only on the second of seven floors, & plan to take my time doing some grinding on each level, but a review should eventually come. 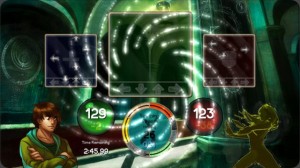 Can you keep the beat?

Those are the games that’ve been keeping me busy for the holiday.  Hopefully I’ll be getting reviews done soon for them.  Have a happy & safe 4th everyone.